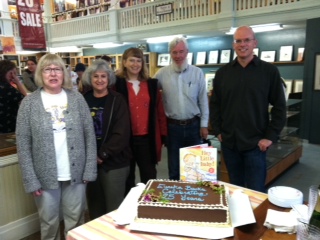 Saturday night I was honored to share a table with  the Eureka children's librarian, Joanne.  They were raising money for their yearly October event promoting children's authors. In addition, Eureka books was celebrating 25 years of selling literature for the community. Be sure to stop in there as they are offering 25 percent off their books for the rest of the month.  Plus, the building is just so beautiful, you have to see it. I intend to be dropping some birthday money there for JK Rowlings' and Anne Lamont's newest books.

The evening was a huge success, thanks in large part to an article run by the local paper, Times Standard.  I believe Scott, co-owner of Eureka books, had assembled it.  About eighty percent of the people coming in to talk with me had come in as a result of that article.  Pays to know people who are more organized and efficient than I am!

Outside the store is a quintessential town plaza, complete with a gazebo for summer bands and areas for children to romp. We could view the man blowing, juggling and swallowing fire. Always fascinating to watch OTHER people doing that sort of stuff.

My eldest son went with me but soon melted off into the crowd to join friends. Guess there was a giant fire shooting metal octopus brought from Burning Man on display that they went to see. Must have been a fire fun night for Humboldt.

This signing seems to be wrapping up the season of book touring on Hey Little Baby. It was a perfect way to end end it as the first signing  I did was at Northtown Books in Arcata, another popular bookstore in Humboldt county.  Soon I am expecting to be promoting the companion book to Hey Little Baby--Toddler Season.  It's been a fun ride.